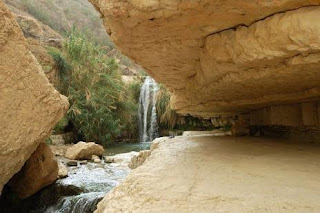 Worship leaders are, by the nature of the their role, up front people.  There is great joy, and to some degree, great satisfaction, to be experienced as we help people engage with God.  However, while there is a wonderfully fulfilling side to this experience, there is also a looming dark side (cue Vader voice).  The temptation is to actually get in the way, and STEAL GOD'S GLORY.  When we do this, we take away what it rightfully God's and there can be consequences for this.  We see this in the lives of Moses and Aaron.

Moses and Aaron went from the assembly to the entrance to the tent of meeting and fell facedown, and the glory of the LORD appeared to them. The LORD said to Moses, “Take the staff, and you and your brother Aaron gather the assembly together. Speak to that rock before their eyes and it will pour out its water. You will bring water out of the rock for the community so they and their livestock can drink.”

So Moses took the staff from the LORD’s presence, just as he commanded him. He and Aaron gathered the assembly together in front of the rock and Moses said to them, “Listen, you rebels, must we bring you water out of this rock?” Then Moses raised his arm and struck the rock twice with his staff. Water gushed out, and the community and their livestock drank. But the LORD said to Moses and Aaron, “Because you did not trust in me enough to honor me as holy in the sight of the Israelites, you will not bring this community into the land I give them.” - Numbers 20:6-12

The Israelites had no water and they were upset and once again bemoaning the fact that they were in the desert, with no grain, figs or pomegranates.  (I've always wanted to use pomegranates in a blog...)  In response to this grumbling, Moses and Aaron fell on their faces before God in intercession.  God responds with the command for them to speak to a rock, and that water would come from it to provide for Israel.  INSTEAD, in disobedience, they took the staff that had been a conduit for God to work so many wonders before and struck the rock with it.

God says to them "you did not trust in me".  For some reason, they felt that that had to work up a show, produce a dramatic moment, and even more by the words that were spoken, "must WE bring you water out of this rock?"

In effect, THEY STOLE GOD'S GLORY.

Worship leaders have this very same temptation.  Especially if we're ever frustrated by the response of people to God in worship.  I've often said to myself "if our people only remembered that they are worshipping the God of the entire universe, and that He is present in their midst, would they then respond with greater passion?"  It is in these moments that I consider doing more that I should to "get the crowd going" or "hype things up".  This is dangerous territory.  I may be treading on holy ground.  I never want to preempt the Holy Spirit.  Only He can cause people to sense His presence.  Only He can reveal Himself to us.  I can only point people in the direction of God.  If I take on more responsibility that I should, I become like Moses and Aaron saying "must WE bring you water".  My prayer is for myself and all worship leaders to be truly discerning as to what our role is and what is God's role.  Though it may look differently in various settings, if we seek His will in this, we'll find ourselves more free to worship in the joy and lead our congregations with as Isaiah 66:2 says, humility and contrite hearts.
Posted by Dan Vukmirovich at 10:09 AM No comments:

Worship leaders often have a lot of responsibility.  Depending on the size of a church, a leader may have to:


With all of these responsibilities (and more!), there is a tendency to neglect what can be the most impactful part of their contribution to a service, THE VOICE!  Vocals will often be the last thing to be rehearsed because they seem easiest.  We rationalize that as long as we listen to the song enough times in the car that we'll have it for the weekend.

1. Work Out Your Voice - Practice your vocal outside of what you are preparing for a given weekend.  This means exercises that you can do regularly to keep your voice in shape, particularly connecting your breath to the tone you are producing.  So many worship leaders have vocal problems because of too little breath support.  I highly recommend Vocal Artistry for CDs with exercises you can do daily to grow your voice.

2. Record Yourself - So critical to listen yourself self sing, not just with the recording of a weekend, but to isolate your voice and listen for tone, pitch, style, etc.  Use a camera phone or a memo app to do this.  Find a karaoke version of a song and sing along.  Critique yourself as any judge would on "The Voice" or American Idol.

3. Practice Singing WITH Your Instrument - If you lead from an instrument there is a whole different set of brain functions happening that need to be practiced so that you can feel free to worship while you're up there.  Especially if you're trying to break bad vocal habits you'll need to do this because your instrument takes your mind away from the vocal.  You can also record this to critique as well.

Hope this is helpful.  Next, we'll take a look at the importance of song choices.
Posted by Dan Vukmirovich at 9:46 AM No comments:

Teach Me Your Way

Going through some soul searching.  Asking God to "see if there is any offensive way in me, and lead me in the way everlasting." (Psalm 139:24)  Wanting to be the man that Christ wants me to be.  To be the husband my wife needs.  The father my kids hope for.  The pastor my church/team longs for.


This requires some shedding of past frameworks of leadership.  Looking to release old impulses of what I think a situation needs and embrace a new way of interacting with those I lead.  I don't know where or how this will work itself out.  I am open.  I am listening.
Posted by Dan Vukmirovich at 8:33 AM No comments:

Singing is Not Filler

This is a teaching that I did for a Worship in the Sticks conference in March.  We've got another event coming on November 5th in Greenwood, IN (south of Indy).  Hoping to equip teams and leaders of smaller churches to lead with confidence.


Posted by Dan Vukmirovich at 11:19 AM No comments:

The Right Song at the Right Time

Lately, we've been in some discussion about choosing worship songs for our weekend services.  We've been using an online music library called Spotify which allows us to make collaborative playlists.  As we find new songs that we like, we add them to the list.  This has been an amazing tool for us to find new songs that we all agree will work for our setting.

With any good thing, there can be a down side and it is this, now that we have a TON of new songs, several questions arise:

We're wrestling a bit with this now.  I have a few filtering questions to consider when thinking about introducing a new song:

Love to hear how others are introducing new songs to the mix.
Posted by Dan Vukmirovich at 11:37 AM 1 comment:

I headed up to Van Andel Arena in Grand Rapids, MI yesterday to see Hillsong United.  Joel Houston and team led us in a 2.5 hour worship experience.  I stood the entire time, but never really got tired. 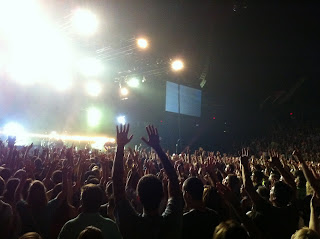 1.  Hillsong knows how to program a worship concert.  They know how to take a crowd on a ride that keeps people engaged.  As they kept the focus on Christ, they were able to move us through a journey of high energy praise to intimate worship and back again.  Their use of lighting, video and instrumentation made the night full of spontaneity and wonder.

2. They understand worship FLOW.  Too many worship team, occasionally my own included, go from song to song with many starts and stops without a great deal of thought about helping people stay connected to Christ between them.  Whether it was performing songs in similar keys, or creating a high energy drum transition, or a video scripture with keyboards underneath, the night kept going.  I also noticed their effective use of blackouts to allow people to switch instruments without it being awkward.

3. They shared the stage between them. Although Joel was the main leader, it was obvious that leadership was shared.  Each leader had his/her unique contribution to make.  It was this sharing that allowed the audience to connect to a whole team rather than one person. I loved this!

4. Hillsong United has an amazing following considering very little airplay.  The arena was packed!  How cool to consider that this was their first trip to Grand Rapids and they packed it out.  Also, besides "Mighty to Save", you couldn't tell me a Hillsong tune that has hit the top of the Christian charts in recent history.  They have built up a following by equipping local congregations with great music that edifies.  This is a unique way to build a following, through other people playing your music.  I'm not sure if there are any other examples of this out there.

A great night of worship!
Posted by Dan Vukmirovich at 6:02 PM No comments:

Reading Psalm 13 as part of the YouVersion Psalms & Proverbs reading plan. I am amazed by King David's resolve. The first part of the Psalm is a cry out to God in the midst of utter despair. We read as David is fully honest with God. Not holding back his frustration. You can almost hear him yelling this at God. And then a shift in verse 5:

But I trust in your unfailing love. I will rejoice because you have rescued me.

This is a big BUT! Despite his situation, David CHOOSES to trust in God's unfailing love. He then says in verse 7 that he sings to God because God is good to him. What faith. Even in the middle of great betrayal and turmoil, David trusts God. I think Matt Redman got it right when he penned "You Never Let Go":

Posted by Dan Vukmirovich at 8:42 AM No comments:

Dan Vukmirovich
Mishawaka, Indiana, United States
I'm husband of the best wife a guy could have and dad of 2 amazing daughters. I have the best job in the world where I get to help people get closer to God and use my gifts at the same time. I have good friends who point me toward God. Yeah, life is pretty good. 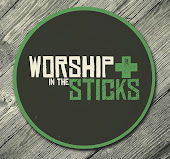